It seems like there’s Day of the Dead stuff everywhere this year!  I’ve seen decorations, costumes, and goodies at Walmart, Target, Walgreens, CVS, and Party City.  You can also use my fun banner or bulletin board for inexpensive and educational décor. 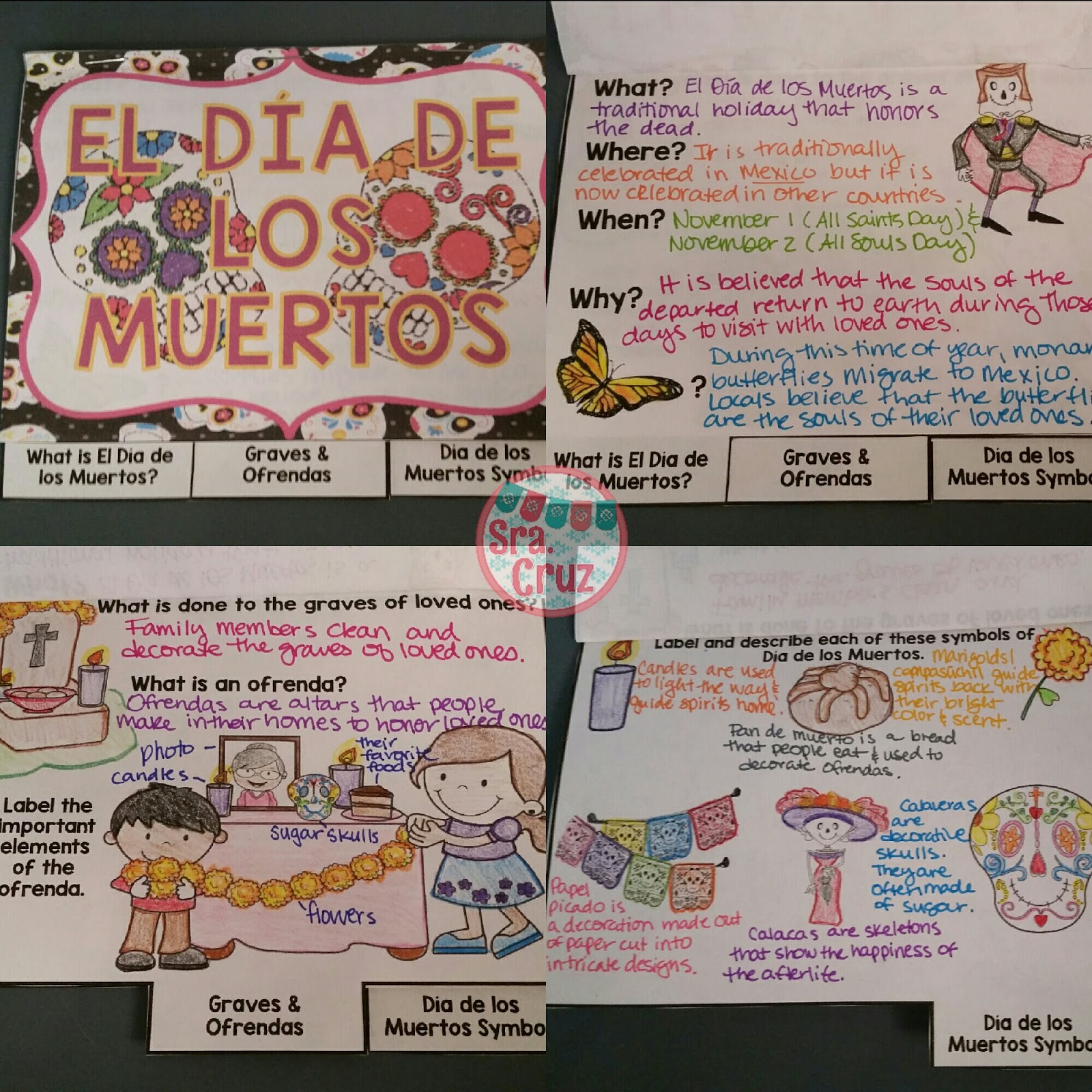 Students can summarize what they learn about Día de los Muertos with this fun calavera writing template: 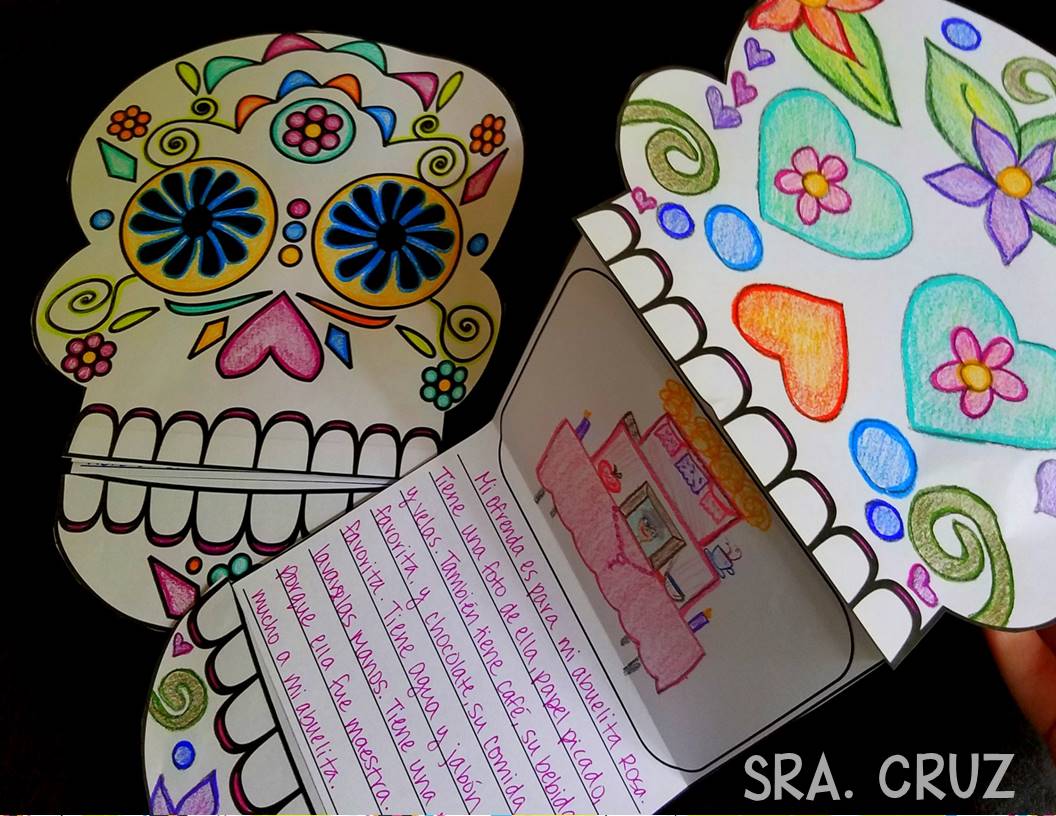 3.  Make an Ofrenda
I think one of the best ways for students to demonstrate the true meaning of Día de los Muertos is to create an ofrenda.  I like to give students the choice of making an ofrenda for someone they knew, a pet, or they can choose a celebrity or fictional character from a movie or book if they’d like.
Making a large ofrenda can be time-consuming and expensive.  In the past I have given students the option to make a shoe box sized ofrenda.  This keeps the scale and cost lower.  Here’s an example of a shoe box ofrenda that I created for my sweet Chihuahua who passed away two years ago. 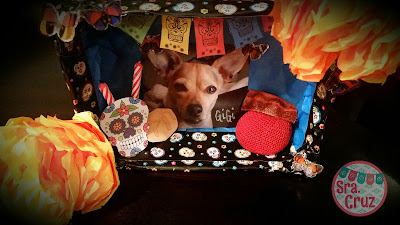 You can tell students to include a photo of the person and things, foods, and drinks that they liked.  They should also include some of the symbols of Día de los Muertos such as calaveras, marigolds, papel picado, etc.  Here’s a labeled version of my shoe box ofrenda for GiGi: 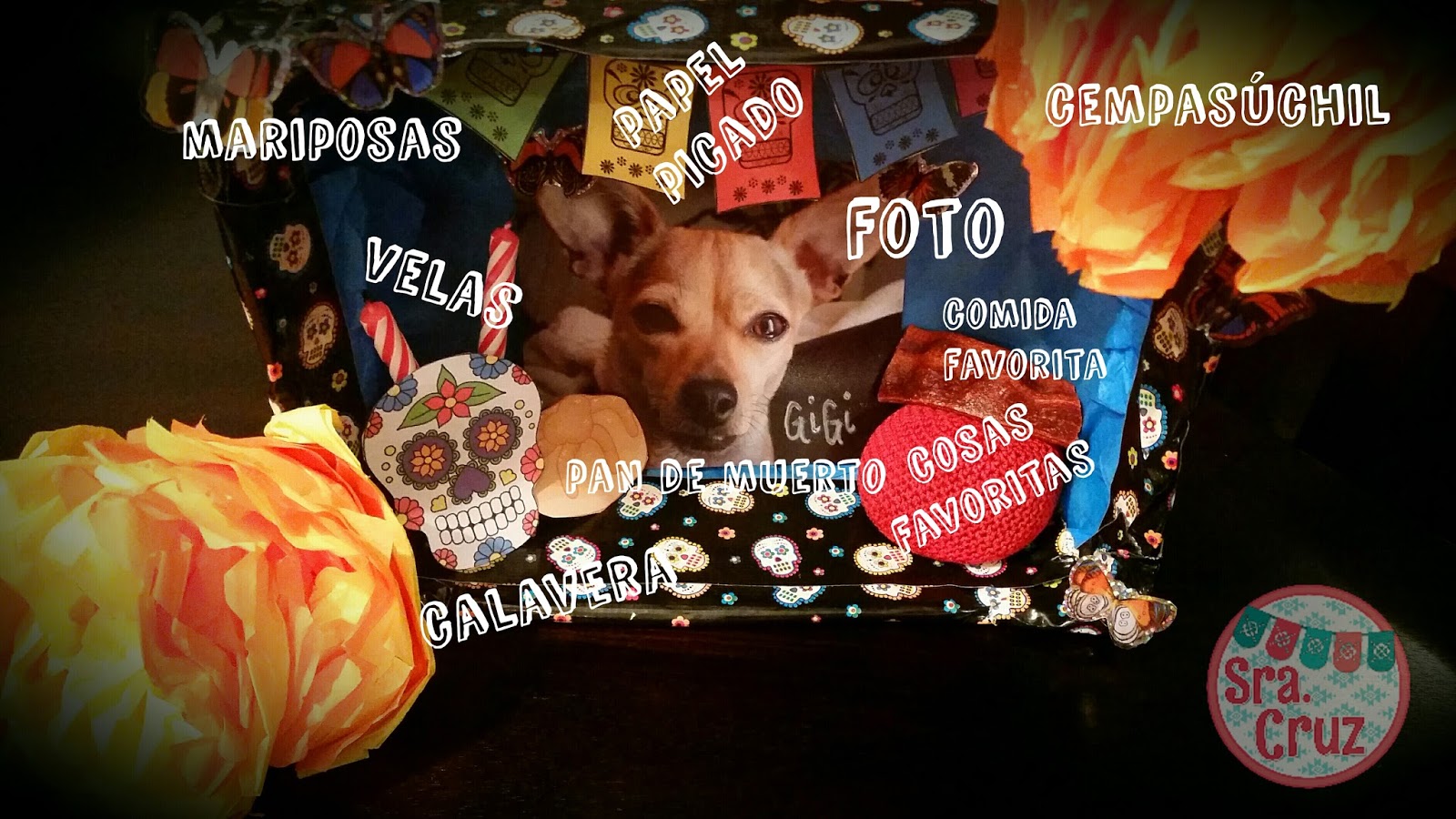 If you’d rather not have to spend the time or money creating at 3D ofrenda, you can have students make a mini ofrenda.  These are great because they capture the same significance of the ofrenda but without the expense, time, and sometimes mess of a larger ofrenda.  Another great thing about the mini ofrendas is that they give students the chance to use Spanish (or they can be completed in English for beginner classes).  For the mini ofrenda, students write the person’s name at the top of the template using papel picado.  They attach a photo in the picture frame and then write the person’s birth and death dates or age in the candle.  In the marigolds, they write nouns and adjectives to describe them.  In the monarch butterfly, they write things that the person liked.  They write and illustrate the person’s favorite foods and drinks in the pan de muerto.  These would represent the personal items that you would normally include in a 3D ofrenda.  You can choose to have students present their ofrenda and they make a great display on a bulletin board, in the hallway, or around the classroom.  These two examples are for my dog GiGi again and for Augustus Waters from the novel and movie The Fault in Our Stars.  You can find the template, directions, and examples for the mini ofrenda here. 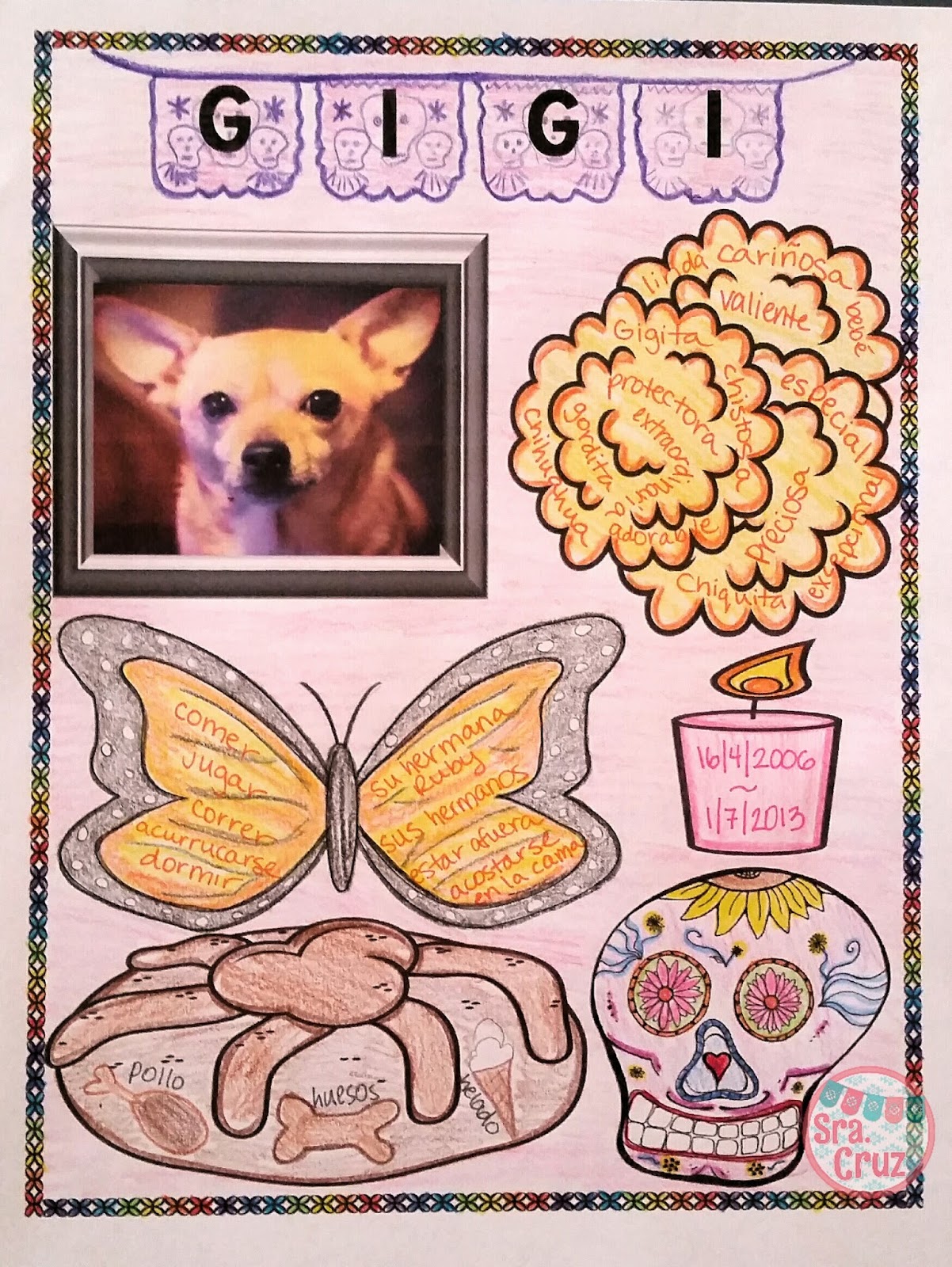 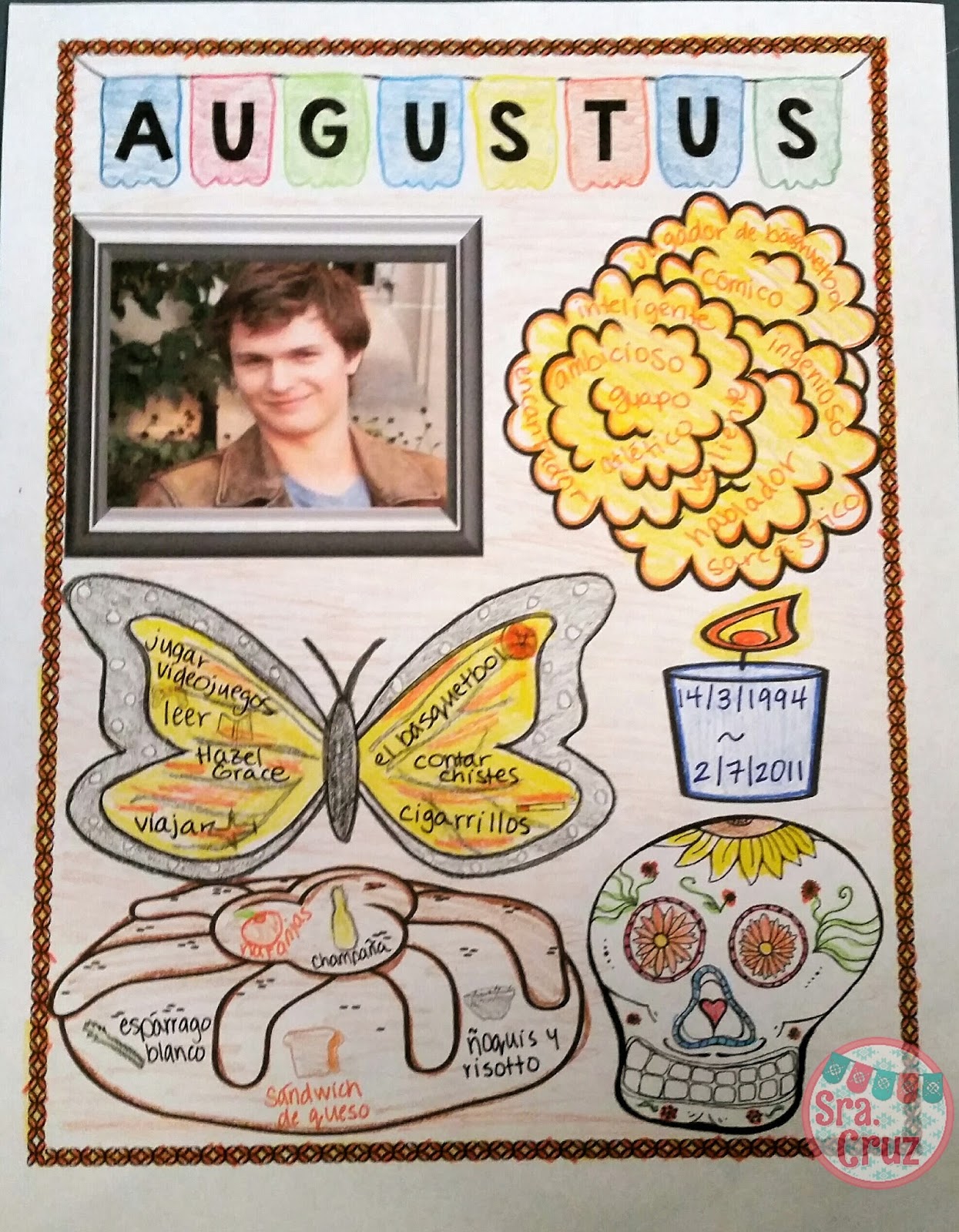 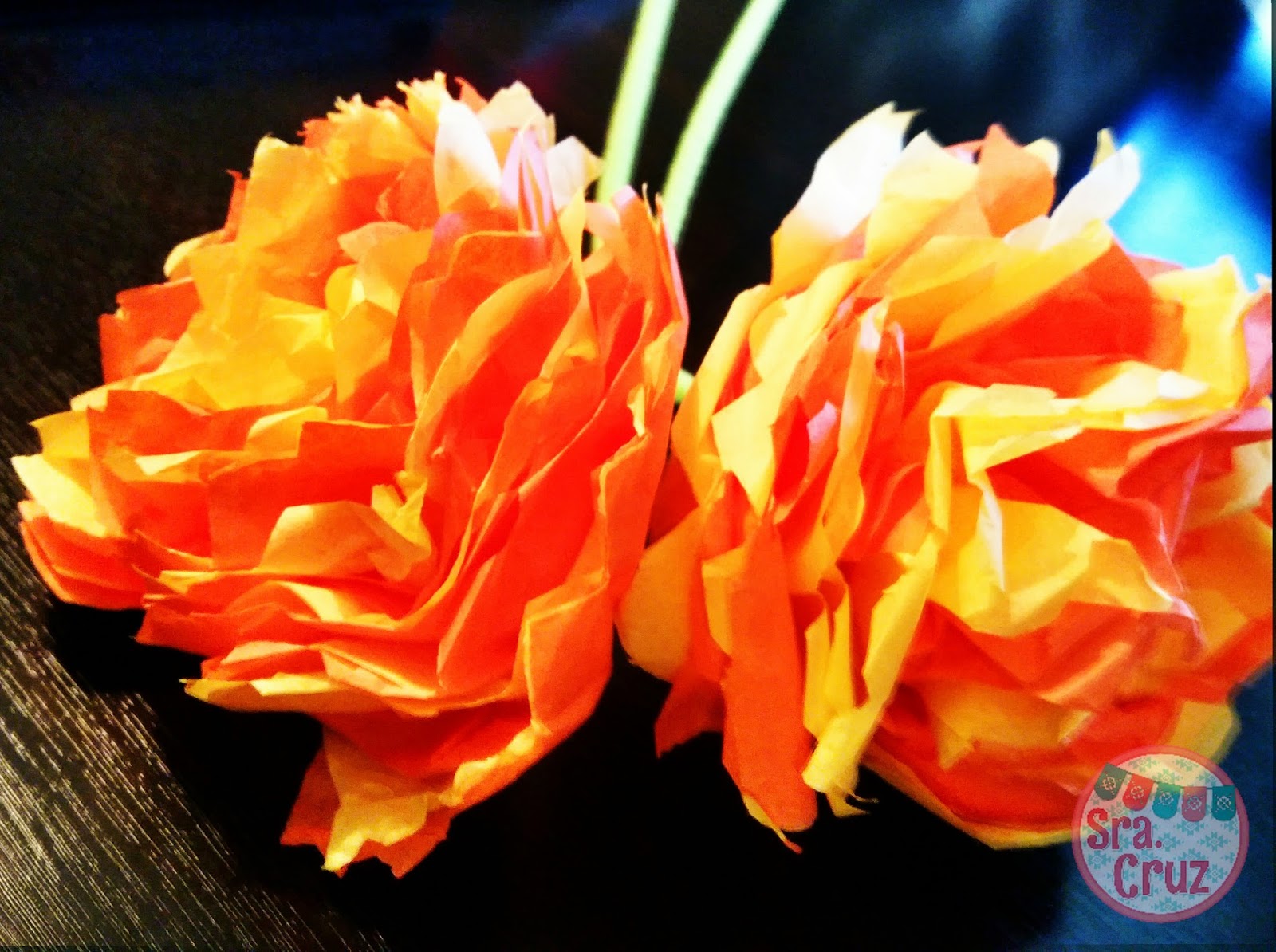 Making paper marigolds is an easy craft for Día de los Muertos.  I like to use orange and yellow paper, but any color makes a fun decoration for ofrendas, displays, or just to brighten your classroom.  There are lots of methods and tutorials on Pinterest and YouTube, but I chose this method and it was super easy:
5.  Name Skeletons
These name skeletons are another fun craft to make for Día de los Muertos. 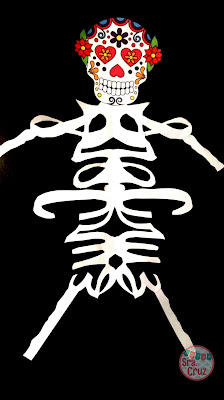 Now in case you don’t see the name part, here’s a sideways picture to help. 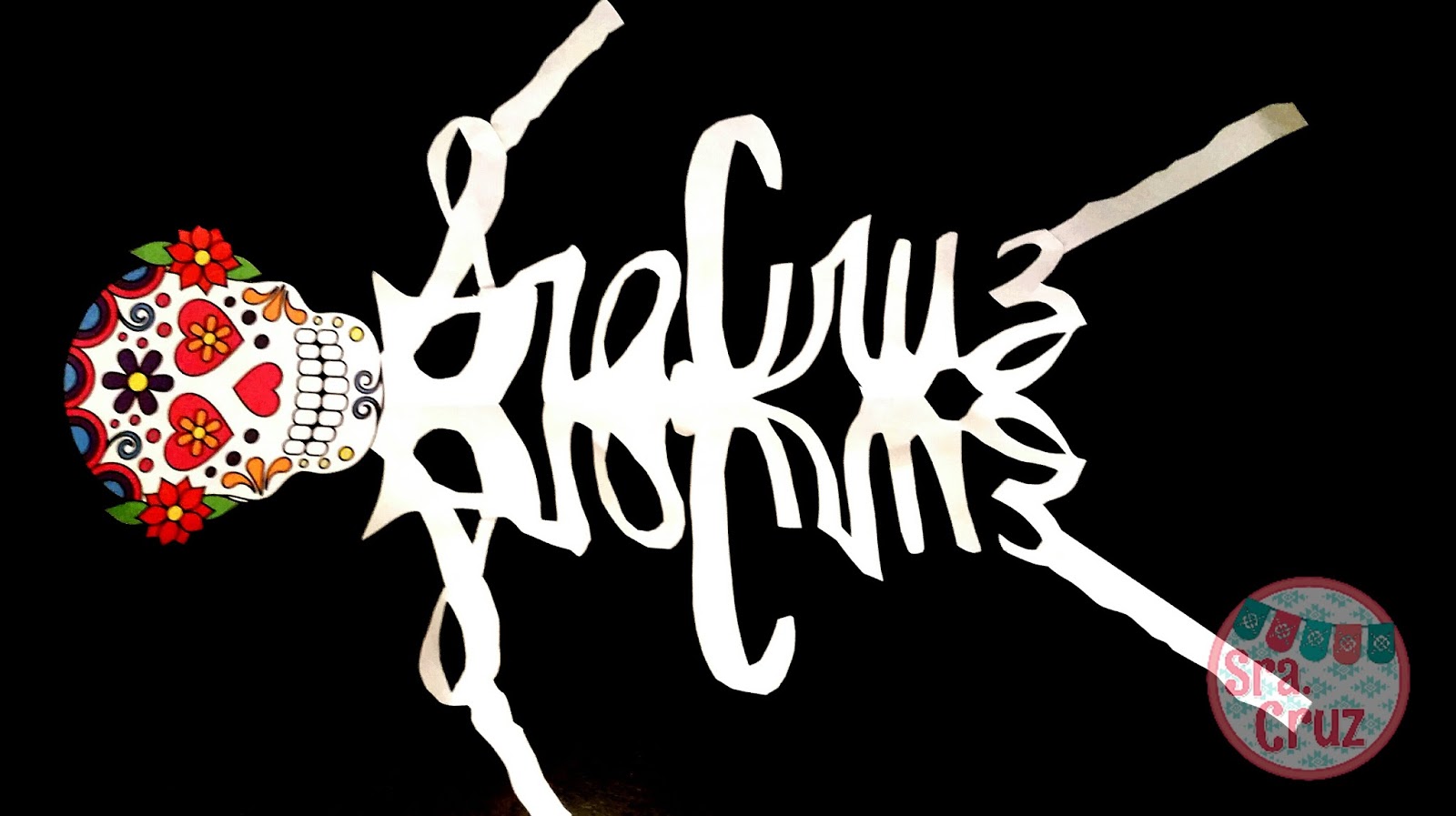 Do you see it?  The skeleton body spells out Sra. Cruz!  Here’s how I made it:
-Fold a sheet of paper lengthwise.
-Use a yellow marker to write your name in cursive in thick letters.   The bottom of the letters should touch the fold.
-Cut out the outsides of the letters and the insides of the letters like I did with the S, a, z.
-At the fold, cut enough of the bottom part of the letters so that you can make out the letters but don’t cut too much so that the two halves separate.
-Open the paper to reveal your name skeleton torso!
-You can use the scraps to cut out legs, arms, etc.
-For the head, you can have students make their own calavera skull and decorate it to fit their personality.  You can also give them a template to use.
-Glue all of the parts together and that’s it!
More Ideas
I’ve pinned lots of other ideas, crafts, videos, photos, recipes, and other Día de los Muertos resources on Pinterest. Check out my Día de los Muertos board here.

I’d love to see how your shoe box ofrendas, mini ofrendas, bulletin boards, name skeletons, paper flowers, etc. turn out!  You can email me or share on instagram.  Make sure you tag me or comment that you posted so I can be sure to see it!  I hope you and your students have a fun Día de los Muertos!